How do you guard your keys ?

Over a million bitcoins have been stolen since Bitcoin began, and most of those were from exchanges.

If your private keys are being managed by an online wallet or exchange, history shows that there's a very good chance you could lose them.

Simbit allows you to take control of these keys, storing them in tough stainless steel to help defend against both hackers and real-world disasters.

Each letter, number or symbol in Simbit uses a custom-designed font for maximum legibility and clarity. The letters are etched deeply into the metal, using a process designed for manufacturing microscopic medical and aerospace components.

The result is characters which are more than just surface deep...they're tough, easy to read and as durable as the steel that they're made from.

Not your typical steel

If you're making something to last, use the right materials.

It's the stuff you wrap nuclear reactor fuel in.

Simbit's materials are rated to survive prolonged exposure to temperatures of up to 1700°F (925°C). That's 600°F hotter than a typical house fire.

Your private keys are secured in cold storage which you control. The wallet can also be padlocked for added security. 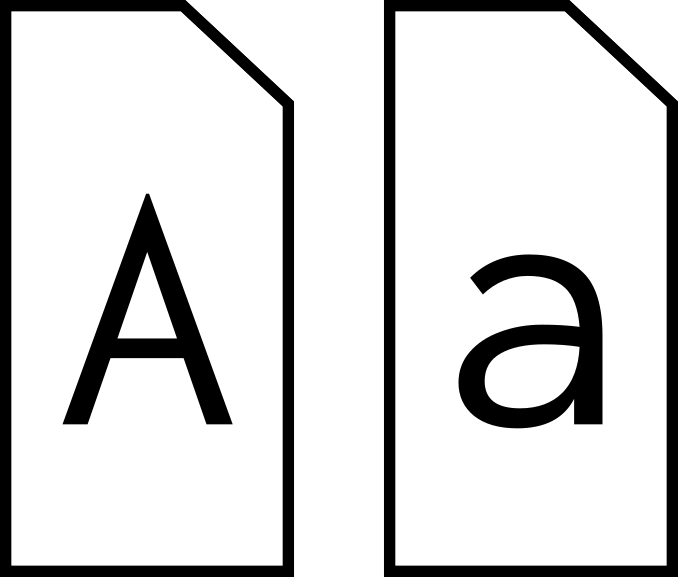 STORES UP TO 114 CHARACTERS

Simbit comes with over 400 character tiles to choose from, including upper- and lower-case letters, as well as numbers and symbols. 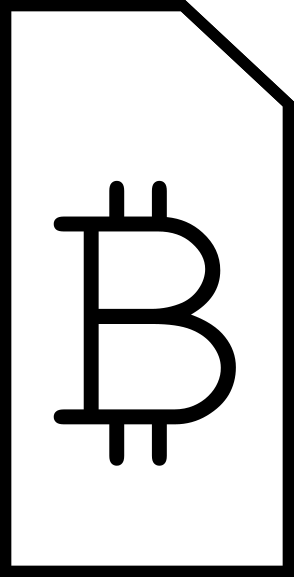 Yes, even dogecoin. Simbit is crypto-agnostic. If you can recreate your private key using the 400+ provided character tiles, you're good to go. 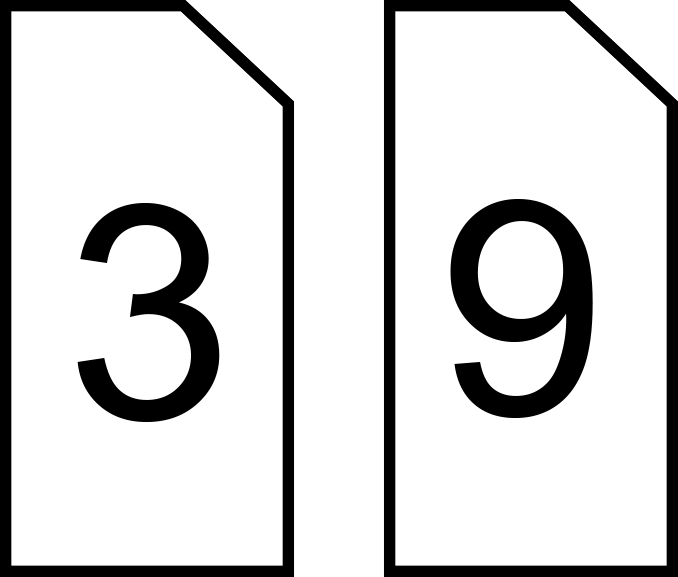 Simbit is the perfect backup for electronic wallets. There's more than enough space to store a BIP39 24 word recovery seed.

How does it work? 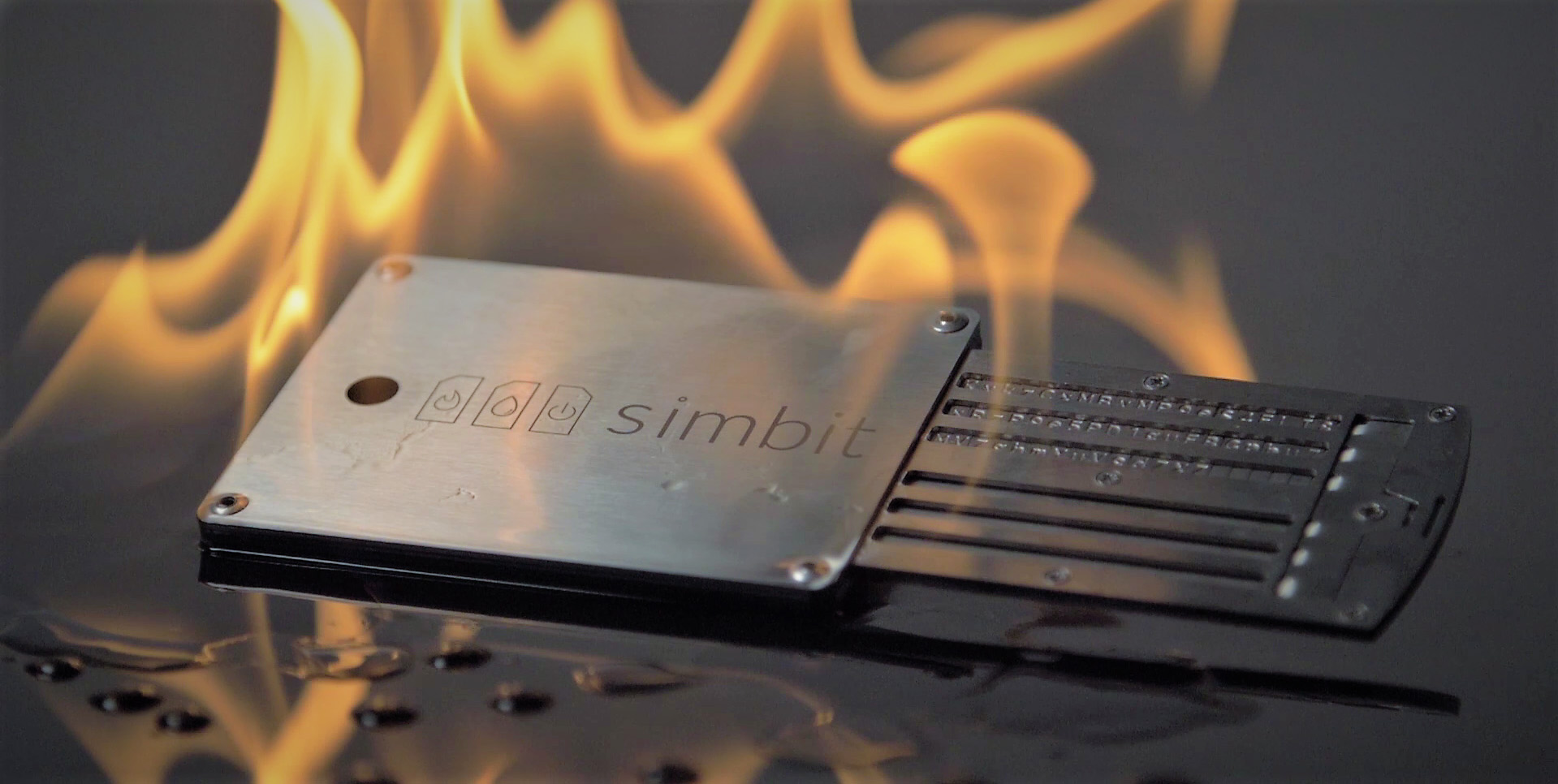 With so many tiles, a single Simbit should do what needs doing. Discount if you buy two. Special price, just for you. 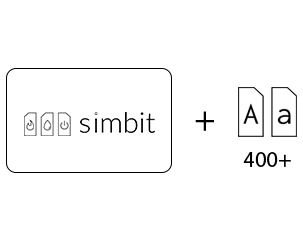 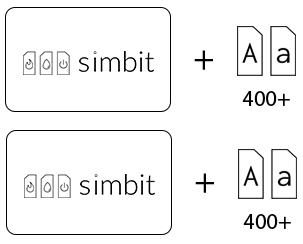 Get in touch if you have any questions - we'd love to help. A couple of the more common ones are below.

Why use a physical wallet?

Firewalls, encryption and renaming that text file to "definitely not my private keys.xyz" won't prevent a determined hacker from stealing or wiping your data.

The simple step of taking your private keys offline is the single biggest security improvement you can make in crypto.

Simbit makes it easy to do this, giving you access to durable materials and a tough design in one neat, shiny package.


How big is a Simbit?

Simbit is larger than a credit card, and smaller than a banana.

The characters on each letter tile are slightly larger than the ones on a credit card, and use a custom font for maximum legibility.

Yep, it's about one bitcoin every 5 minutes, over the past 10 years...

Hacks against exchanges alone account for more than 900,000 stolen bitcoins. We found at least 16 examples of successful attacks on exchanges.

A couple of the bigger ones include:

Between these hacks, and another quarter of a million BTC lost to major online forum thefts in the early days, the number of stolen coins stretches to well over a million.


Can I buy a Simbit with crypto?

Absolutely. We support BTC and BCH, through our cryptocurrency payment provider BitPay.

Simply add a Simbit to your Shopping Cart, and choose "Pay with Bitcoin" from the options.


What guarantee do you offer?

Simbit is well-designed and made from strong, industrial materials. We guarantee the product, but not the cryptocurrency stored on it.

Simply said, there's no way that we could ever prove how much crypto is on a Simbit, and so it's not something we could ever rationally put a guarantee on.

Instead, we're offering you a tool which won't melt in a fire, won't rust away in a flood, and that can't be hacked. We're pretty sure that beats any storage method you're using now.

So, if you're interested in improving the security of your cryptocurrency, we'll help you by providing the best tool for the job.

And if not? Well, next time your portfolio doubles in value, we hope you'll think of us again! Good luck, bold adventurer.


Do you ship to my country?


How do I lock my Simbit?

You can use a padlock if you want to stop someone opening your Simbit. Great if you're worried about someone taking a selfie with your Lambo fund...


What cryptocurrencies does Simbit support?

Simbit can store any cryptocurrency, as long as the private key or recovery seed that it uses can be reproduced from the 400+ character tiles.

Since most cryptocurrencies are derived from Bitcoin's code, this means that most common private key formats are supported by Simbit (including BTC, BCH and LTC).

The main exception is where a cryptocurrency stores private keys in hexadecimal format (meaning the private key only contains "0-9" and "a-f" characters). A common example is ETH.

These cryptocurrencies require a bunch of those characters, and so there's a higher chance that you won't have enough tiles in a single Simbit (although it's still likely you'll have enough).

Can I back up my Trezor, Ledger or KeepKey?

Absolutely. Simbit plus one of these devices is a really powerful backup. It's a great idea to have your digital hardware wallet somewhere easy to use, and your stainless steel Simbit back up somewhere else, secret and safe.

Each Simbit ships with complete instructions on how to do this. Carry on reading if you're interested in how it works...

When you set up your Trezor, Ledger or KeepKey, you created a recovery seed (a unique list of 12-24 words) and probably wrote it down on a piece of paper that they provided. This recovery seed allows you to restore or duplicate your wallet on another device, should the original be lost or destroyed.

Simbit is a stainless steel replacement for that piece of paper.

(You DO still have that piece of paper, right? Would it be safe if your home had a burst pipe, fire or someone spilt coffee in the wrong place?)

These recovery seeds use words selected from something known as the BIP39 word list. A cool feature of this list is that the first four characters of each words are absolutely unique. Check it out for yourself!

All you need to do is to backup the first four characters of each recovery seed word, in the correct sequence, in your Simbit.

A 24 word pass phrase needs 96 characters to do this (24 x 4). We give you 114 spaces! This means you can put a blank tile between each word to make them clearly separate and easier to read.

Each Simbit comes with over 400 character tiles to choose from, including extras of the most common letters in the BIP39 word list.


Couldn't I just make my own steel wallet?

Of course you can! It's pretty simple to buy a metal stamping kit, some sheet metal, and create a back up that way...

However, it's worth considering this.

Making a single sheet wallet is simple, but it doesn't offer much security against something as simple as a camera phone. The key is immediately visible to anyone who finds that piece of metal, and they could make a copy of it in just seconds, without you ever knowing.

That means someone else could control your keys, and you never know until they empty that wallet.

So, your single metal sheet needs a strong cover. Suddenly you're in the realm of needing expensive tools and working out methods to form and join multiple sheets of metal.

Simbit is cheaper than just one of the tools that you'll need to do a good job of it. You also get the added advantage of using a premium stainless steel alloy, a built-in method of covering the private keys, and tiles which are beautifully etched for maximum legibility.